No, there's no triple layer chocolate cake with luscious cream filling nor there's any heart-shaped creamy cheesecake with elaborate decorations. I guess it has something to do with the over eating during Chinese New Year that had tone down the baking mood. But I didn't want to let this special day pass by without making a little something special for my 3 Valentines at home. :P So I decided to do something not too elaborate but yet presentable as a nice desert to serve. I went with one of the simpler recipes in Rose's heavenly cakes cook book, i.e. Chocolate Bull's-Eye Cakes. And since I have this silicon heart shaped cake mould, I made this: 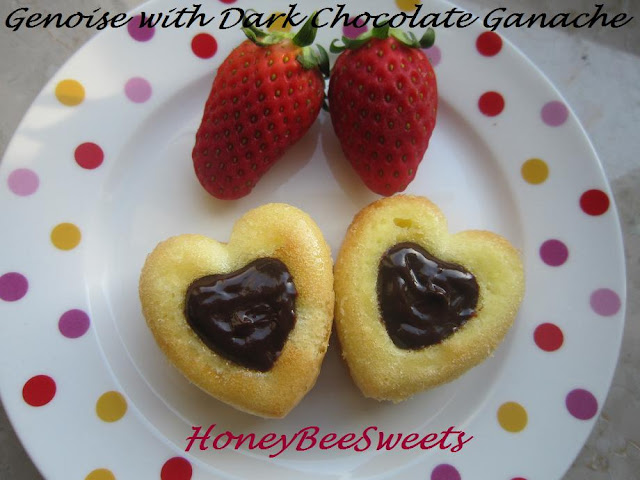 If you have that book, you probably think the cake look kinda different, I don't blame you, it is! Besides the different cake mould used, I did skip a few steps in Rose's recipe as I think it's not necessary for my taste buds. :)) Her recipe actually soaked the genoise with syrup (sugar and water mixture) and then brushed the mini cakes with apricot glaze. I think you can imagine as I was worried it'll be too sweet...:P Also, I made simple chocolate ganache verses Rose's Chocolate cream filling which involves adding egg yolk to it. 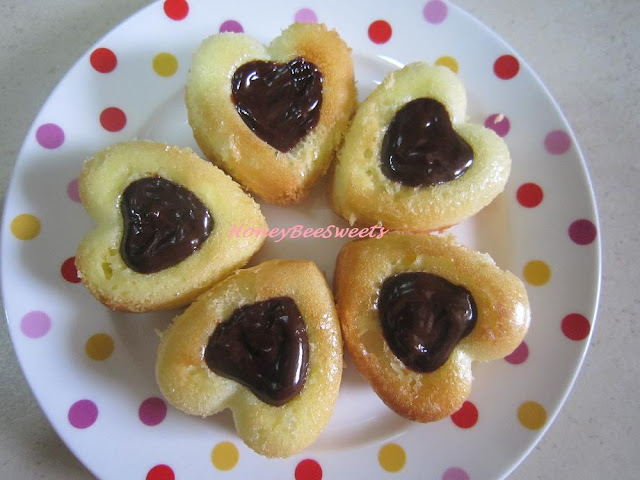 Fortunately, the cakes still turned out heavenly! I vowed that I will use this sponge cake recipe from now on. :)) It's tender soft and yet doesn't deflate much after it's out from the oven. :) Anyway, without further ado, here is the recipe: 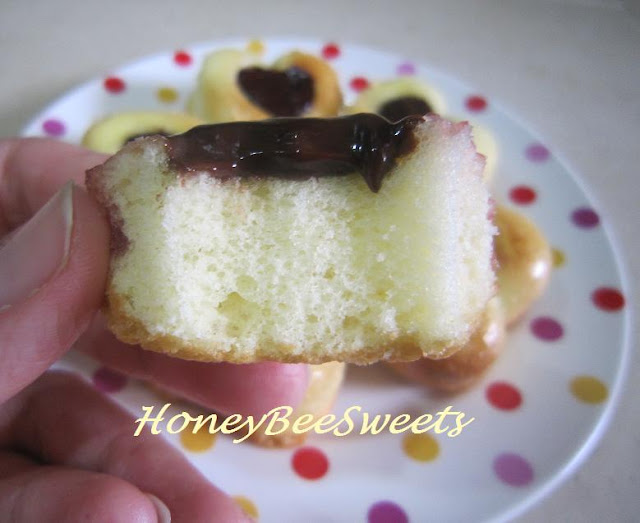 See the fine bubbles in the sponge cake? I like this recipe as it doesn't involve using too many ingredients...e.g glucose. Try it for yourself and you'll see. :) 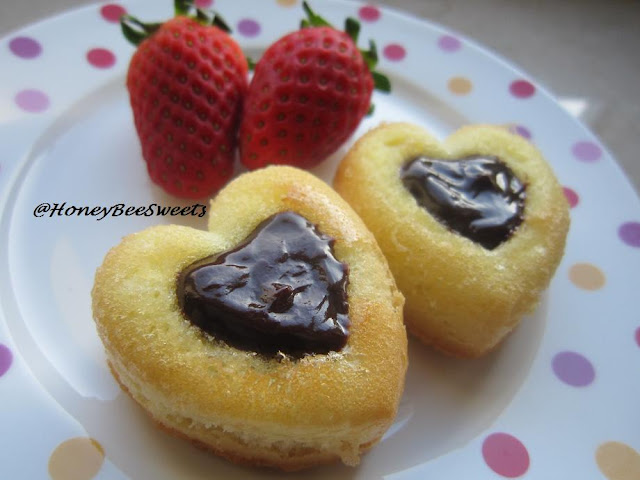 These mini cakes are such a delight to snack on. :) I think I will double the recipe next time to make more to share. :D My 3 Valentines loved them and said its the best Valentine's day gift, hahaha!

I am also submitting this to Aspiring Bakers #4: Love In The Air (Feb 2011) hosted by Cuisine Paradise.

I love this. It's quick, easy and furthermore looks delicious. Thanks for sharing :) Happy Valentine Day to you!!!!!

This look cute and good. Happy Valentine day to you.

They look so lovely! I would love to have one!

Bee Bee, it was very sweet of you to whip up something special and petits for your Valentines! I guess recipes are for reference and to be taken as sources of inspiration. Good job! =D

Happy V-Day to you and your family! Hope to see you again someday. =)

Happy Valentine Bee Bee...:)
Beautiful hearts you have here, I like them so much! I din bake any since those CNY cookies...haha! Still lazy....;p
Btw, do you think I can use your recipe for my strawberry cheese cake which need a layer of sponge at the bottom?

Happy Valentine's Day! These little sweethearts look so soft and yummy! Bookmarked! Thanks for sharing!

that's sooo nice! it look so fluffy and light! topping it off with choc definitely is a bonus to the yummy factor! (: happy valentine's day (:

Very pretty. Your three valentines at home must have been thrilled!

Those are lovely heart shape cakes. Very beautiful and perfect for Valentine's Day!

The texture looks so fine and spongy. Yum! The heart shapes are adorable. I wanted to try out a sponge cake recipe, but it had glucose and I don't think we have it here in the states... I'll try this recipe out one day. Happy Valentine's day to you.

I'm still finding THE sponge cake and will bookmark this! Lovely cake :)) Thanks for sharing,

Happy Valentine's Day Bee Bee. These little heart shape Genoise are cute and they look so light and soft.

Thanks Ellena! This is indeed a very simple desert to whip up. ;) Happy Valentine's Day to you too!

Thanks for dropping by Sonia. :) hope you had a wonderful Valentine's Day yesterday too!

Sure Angie! You can have a dozen if you come by my place. :)

Pei-Lin, sorry to know that you're still recovering from a cold. Do take care and yes, hopefully we will meet up again when soon....before your work takes pup too much of your time! :) take care my friend and happy valentine's day to you too!

Happy Valentines's Day to you too Reese! I guess u did have a nice time yesterday. :) oh yes, you can definitely use this sponge recipe for your cheesecake base....it'll be a keeper, trust me. :)

You are most welcome Wen! Hope you will try out this genoise recipe someday. happy Valentine's Day to you too!

Thanks Sweetylicious for your compliment. :) do try it out next time and you will love it too. Happy Valentine's Day to you too!

The texture is so fine! Looks so delicious and pretty! Thanks for sharing.

Thanks for dropping by j3ss. ;) Happy Valentine's Day to you too!

Thanks Shirley. :) Actually, they finished it up the genoise cakes real fast (since it was small & not a lot). I wasn't to sure about the thrill involved, hahaha, but at least there is some tummy satisfaction, lol!

Thanks Ann! I wished I had made them in some kind of pinkish or red color though, so as to make it even more valentine like cakes, hahaha!

You are welcome Esther, hope this genoise recipe will work out fine for you. But i remember when i was still in CA, i would use light corn syrup to replace glucose if needed. Anyway Happy Valentine's Day to you too!

Thanks for dropping by Esther from quizzine. :) Ohh...hope this sponge cake recipe will be THE one you have been looking for. But do watch out for some of the steps...can be quite tricky.

Thanks Gert! Happy Valentine's Day to you too!

Hey Jess, you know after my Lou kong saw this, his first reaction was " Ai ya, still have so many NY cookie leh, still baking cake ah?" * sigh* :P

cute and the texture of the sponge looks really good, your 3 valentines must be so excited looking at these!

It's so cute & lovely cake. The texture so soft & spongy. Thanks for sharing this, I wanny to try this too :)

Boy， these are so cute. Loving the sponge texture and also the ganache. Happy Belated Valentine's Day! ha.. Btw, how's the night? Sure, it's a good one.
With love, kristy