Mid year school holidays! A nice little break for the kids from books and school. ;) As for me, as much as I love my time with my kids, I always find that my so call "free" time seems to disappear real fast with the kids at home. ;P And that is also one of the reasons why I am not posting as much. :P And before I disappear again for my short vacation, I would like to post up a couple of cake recipes which was done a little while back.
First is my MIL's birthday cake. I have chosen to bake the same Eggless Tiramisu Cake which I posted last month. Main reason for this repetition was because my MIL seems to love this cake a lot the last time I baked it. She even requested to leave an extra slice for her to enjoy the following day (this happens rarely). With that I knew she would love this tiramisu cake for her birthday. 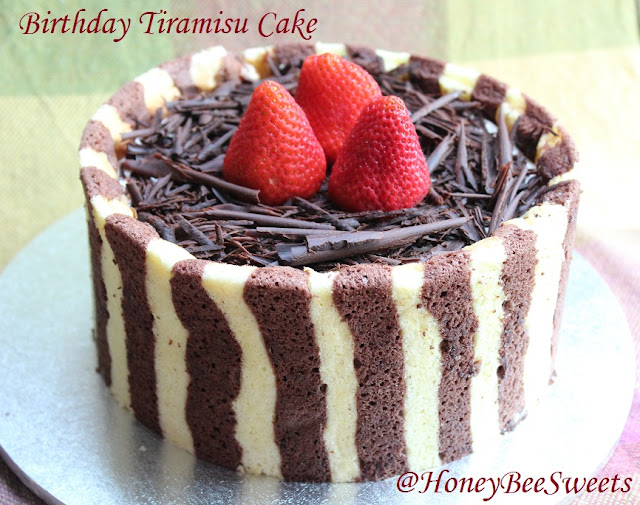 I decided to steal the same decoration method as last year's birthday cake, which is to have a sponge cake wrap around it. Perhaps not as tedious but still quite a bit of work if I do say so myself, lol! I shall only post up the recipe for the dual flavor swiss roll cake here. Please refer to my previous post for the tiramisu cake recipe. 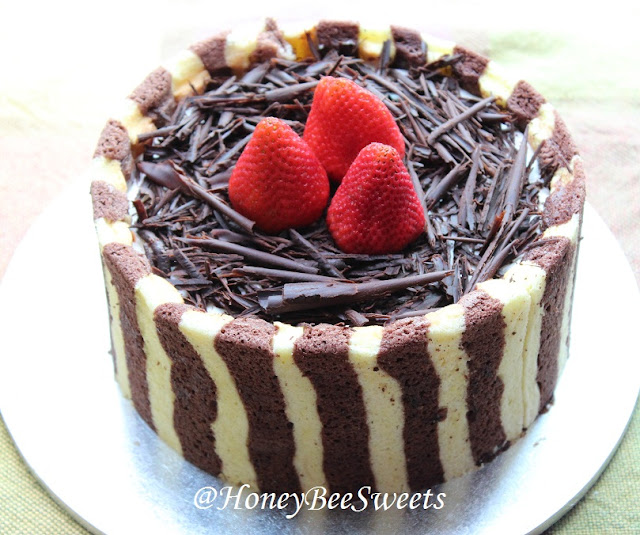 This Swiss roll recipe uses the Egg separation method "分蛋式海绵蛋" which yields one of the softest cake, even after refrigeration. For step by step pictorial help, please refer to my previous post here.
Ingredients for Dual Flavor Swiss Roll Cake: (makes a 13"x10")
Set A:
30g unsalted butter, melted and cooled
4 large egg yolks
20g caster sugar
Set B:
4 egg whites
65g caster sugar
40g superfine cake flour
1 tbsp cocoa powder
Method:
Remember to save some mascarpone cream to cream around the cake so that the swiss roll can adhere properly. An adjustable cake ring would be very handy here. 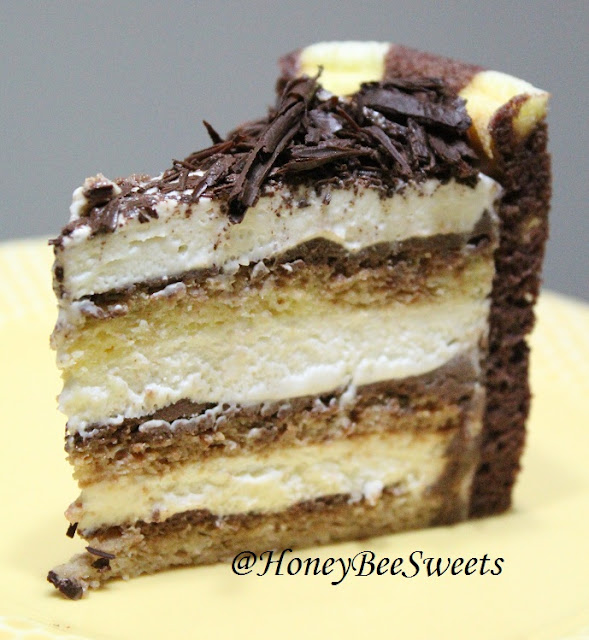 A look at interior...from the last slice which I salvage after the celebration. :) Actually, I like this cake a lot too, it has this well balance taste of mascarpone cream, soft sponge cake and chocolate. I will definitely bake this again for more family gatherings later this year. ;)
I would like to submit this to Bake-Along No. 25 1st Anniversary: A Layered Cake.
It's my first time joining in and I'm so happy that I'm finally taking part in this bake along! (^o^)


The other recipe I wanted to post up is Marble Crumb Cake which I saw over at Daily Delicious almost a month back. I knew the moment I saw it, I have to bake it! 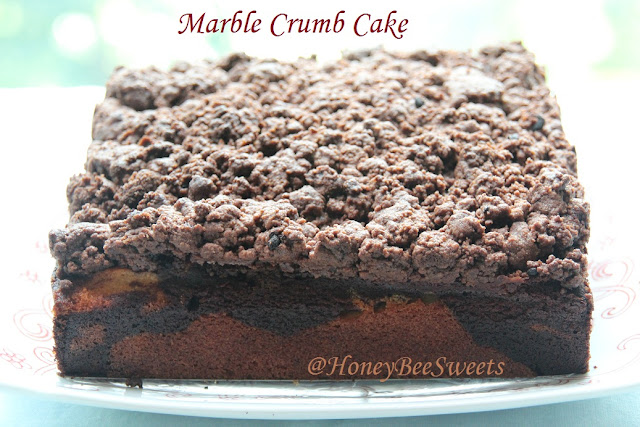 Its so hard to capture a nice picture with this dark and brown cake! Doesn't look as good as it taste, trust me on that. :P 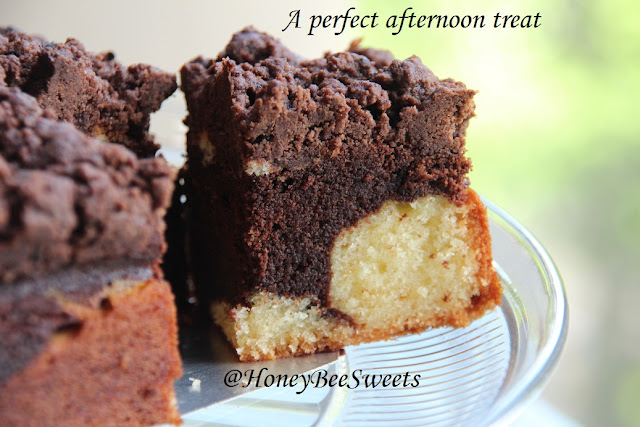 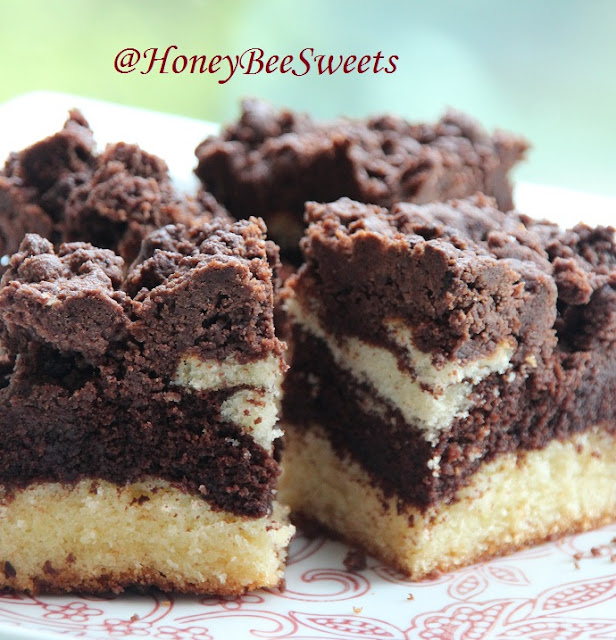 I had reduce the sugar by 30g, plus I used 70% cocoa chocolate verses using milk chocolate, so this is really not that sweet. ;) 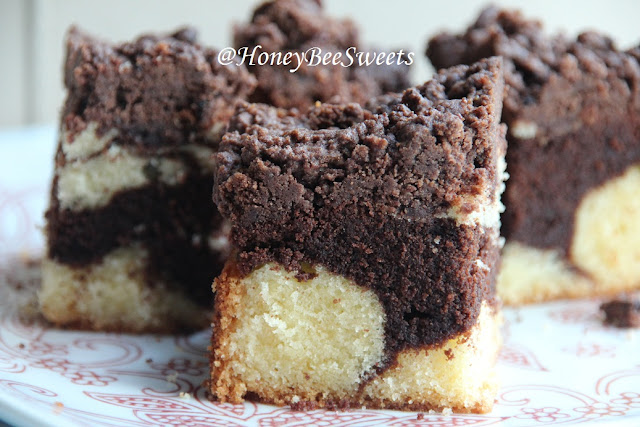 Hopefully these 2 cakes have inspired you to bake something nice for your love ones this holiday. :)

I realize it has been awhile since I last baked a chiffon cake. And on top of my to-do chiffon bake list was this Earl Grey flavor. I have always wondered how a tea flavored chiffon would taste like. And being a home baker does gives me the chance to try out all sorts of special flavorings. Apart from the usual pandan and orange flavor, I bet you can't find these chiffon cakes in your nearby bakeries. :P So I guess being a home baker does have it's advantages, heehee. ;D However, I consider myself quite a practical baker, I will usually bake stuff that my family will consume, heehee. So you won't see me baking something out of the ordinary here. ;P 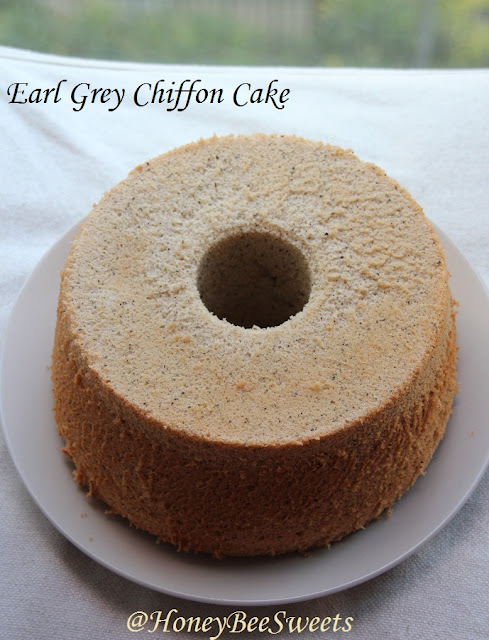 Earl Grey being one of my favorite teas to drink, so it was an obvious choice to use. Plus my previous successful attempt on the Earl Grey Maccarons, I was further encouraged that it will be nice. And I was right. :) 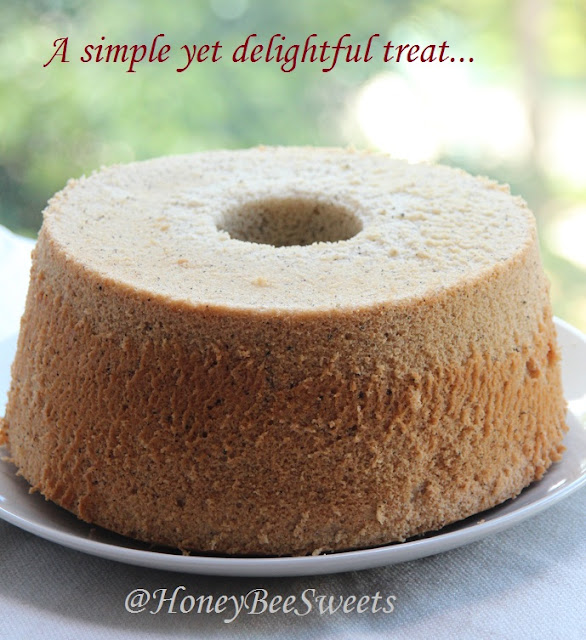 I got this recipe from a Japanese Bake Book (Tawianese translation) call 《西点学习大百科》. It was recommended by Grace from Kitchen Corner and it was definitely a good buy. ;) 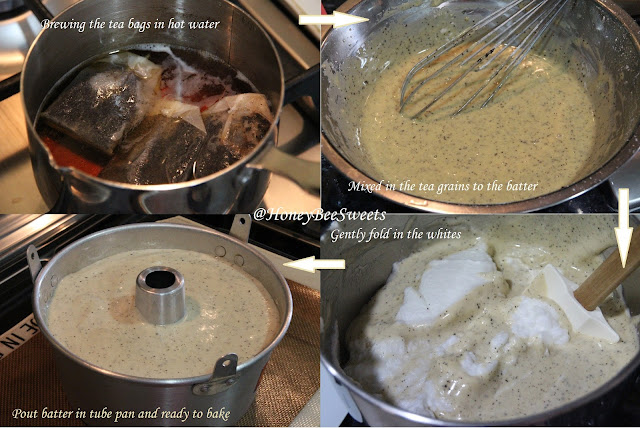 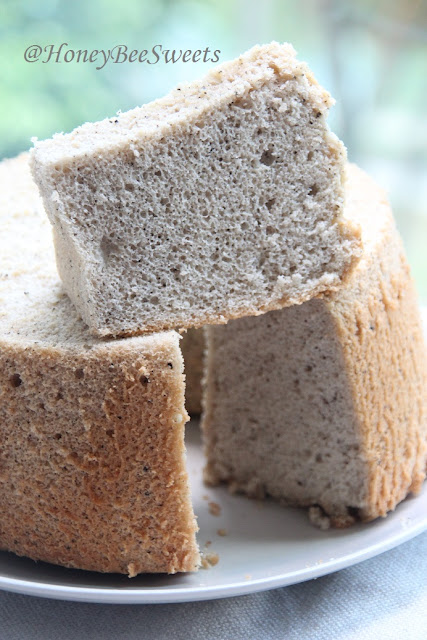 The aroma from the tea was fabulous. Evident but not strong, slightly fruity scent and mildly sweet. And the cake was tender and moist, just how I like it. :) If you are worried about the tea specs in the cake, it is really small and you will not even notice it when eating. ;) 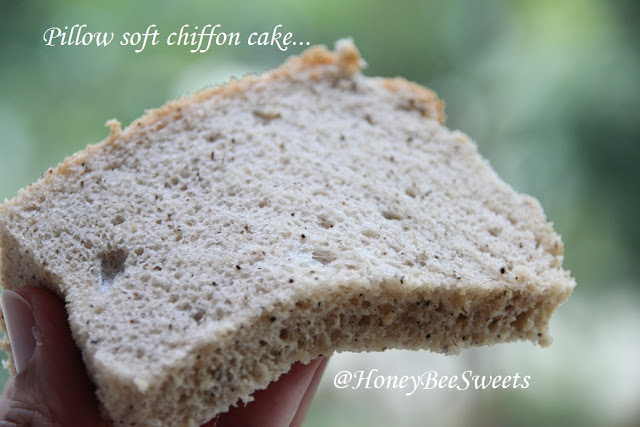 You can see that the cake is indeed soft and fluffy. I will definitely bake this cake again. ;) Hope you will give it a try too!

Have a good week ahead everyone

The kids' mid-year exams are finally over and I finally have a breather from all that hectic revisions (almost sounds like my exam!). I guess I am just a typical stay-home mum that always worries about their kids' work more then they do! Anyway, school work aside, I'm glad I get to do my regular bakes and bread is definitely one of them. I must say I have a weakness for bread, and if I have to survive on one food and one food only, I would choose bread, hahaha!
Today's bread recipe was done a month back and now I finally got the chance to post it. I must say this wholewheat bread recipe is really good, and I have already made it twice! ;) Not only is it healthy, it's one of the softest wheat bread I have made. ;) 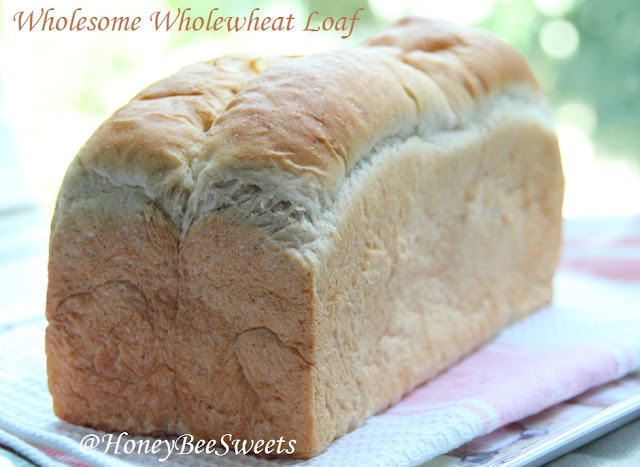 I found this wonderful recipe from a book I found in the library call "吐司麵包的烘焙技術". A Japanese publication, translated in Taiwan which consist of so many wonderful bread loaf recipes. I literally spent hours studying it. ;)) I've ask my brother to purchase this book for me from Taiwan...can't wait for it to arrive! (^o^) 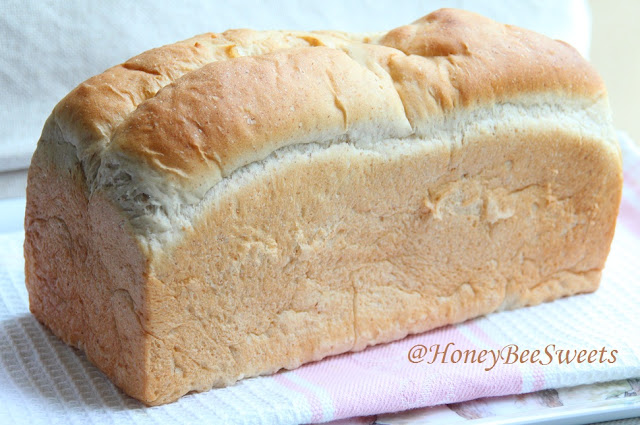 This recipe calls for a starter dough which needs to be chilled up to 12 hours. So do a little prep work will be good. I actually left this starter dough in my fridge up to 36 hours the 2nd time I bake it and it was still good. ;)
I have made slight changes and portion the ingredients to my needs. Here is the recipe:
Ingredients for Honey Wholewheat Loaf (Using Starter Dough technique):
Pre Dough:
60g whole wheat flour
60g bread flour
120ml water


Mix all of the above ingredients together till well combined. Store in an air tight container and chill the fridge up to 12 hours. 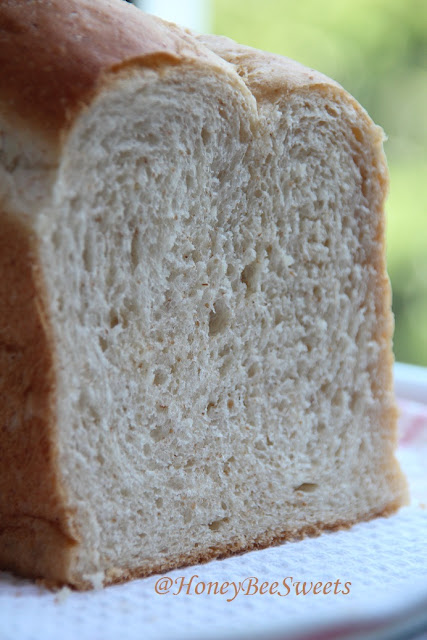 Even with the addition of wheat, this loaf was surprisingly soft, even on the following day. My kids down it happily, not knowing the wholesome goodness packed in the bread. ;) 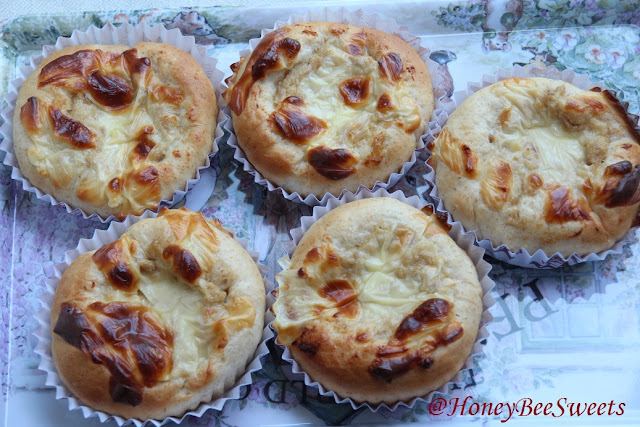 I made some tuna cheese buns as well. But after it's out of the oven, I realized I should have used those pizza topping cheese instead of the regular sliced cheddar cheese...it's way too "toasty" looking. :P 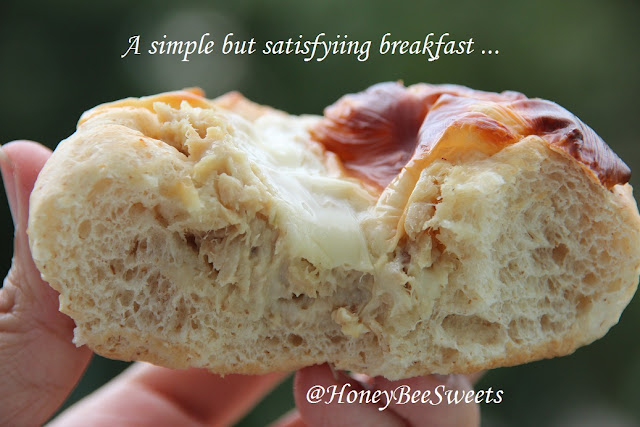 A shot to further convince you to try out this healthy recipe. ;)) Try it and you will know wholesame can be tasty too. ;) Hopefully I would be able to post up more recipe from this wonderful recipe book. If you are bread lover like me...stay tune! ;D

Have a great week ahead all! Cheers!

Hi there all! Almost seems a little foreign when I want to start a new post on my blog. :P Haven't blog for more then a week now. ;P Been busy with kids and house, so just didn't quite find the energy to write up a post at the end of the day, although I am still cooking/baking away. But I figured I can't just dump and ignore my blog altogether now, at least not yet, hahaha! Anyway, bare with me and I will try to post when I can and I thank those new followers and regular readers for their support!
Today's recipe was actually done awhile back but only manage to post up now. It's actually a Chinese dish which are usually served in dim sum restaurants, call Pan Seared Meat Dumplings (鲜肉馅饼). Traditionally, these dumplings are filled with pork, but I will leave the meat choice to you, chicken, pork or even beef, whichever you fancy. (^_^) Sometimes these dumplings can be filled with chives (韭菜) and thus it will be called chive dumplings (韭菜馅饼). 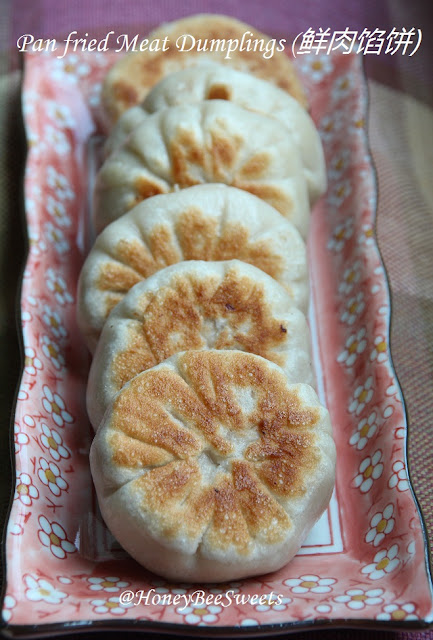 You most probably have seen and tasted these dumplings before, but perhaps the shape of it might differ. Some might look more like a mini curry puff shape which most of us know them as 香煎饺子. Whatever the shape might be, I think these are pretty delicious and worth making them at home. 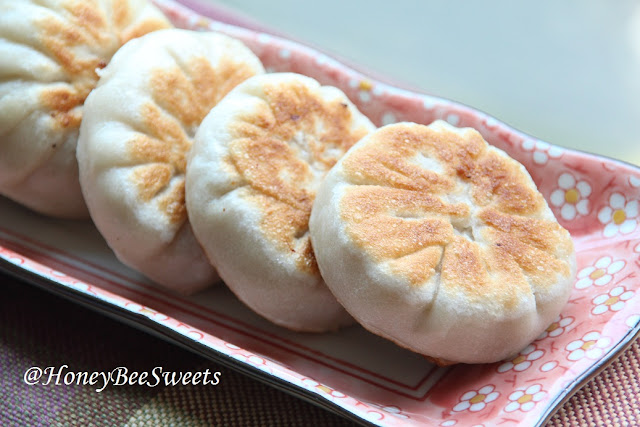 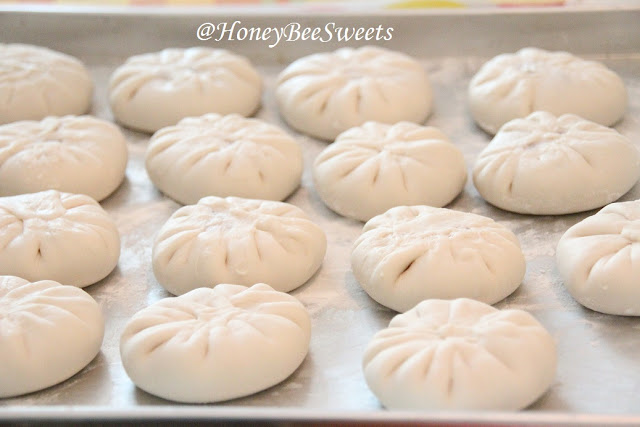 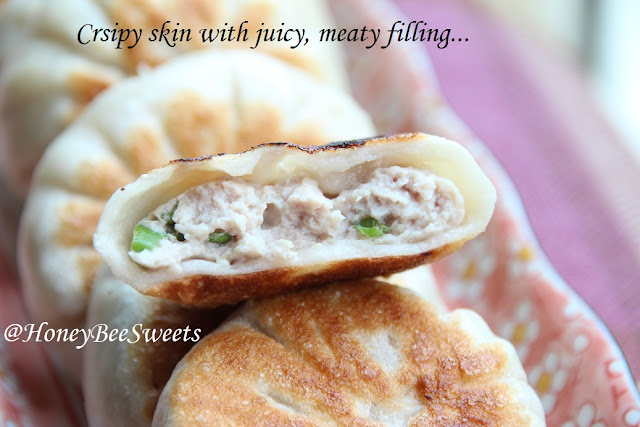 Once you take a bite, you will taste the crispy skin follow by the juicy and meaty interior. And you won't be able to stop at just one. ;) 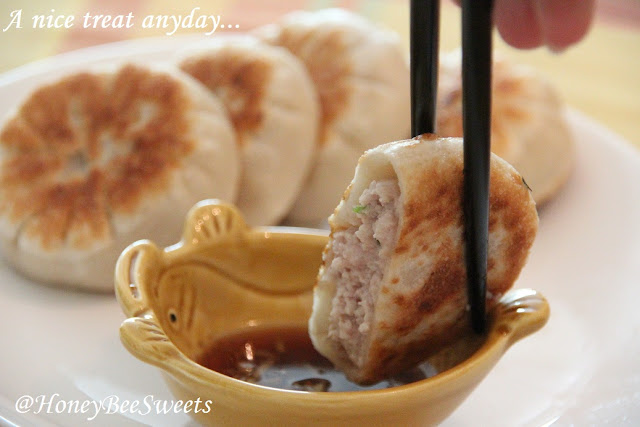 I love eating with ginger and vinegar... it brings out the sweetness of the meat. ;) In fact, call me weird but I love vinegar in several of my food, lol!

I am happy to submit this to this month's Aspiring Bakers #19: Dim Sum Affair (May 2012) hosted by SSB of Small Small Baker。

Thanks for staying on the read my post. Have a great day all! Plus good luck to all the students that are having their exams now! ;)