Hi there all! How is everyone doing? Well, if anyone have noticed, I've gone missing for 2 weeks and now I am finally back! I was far and away on a fun holiday with my little family. We went on a self-drive trip in lovely Melbourne and I have so many photos that I want to share with everyone! But that will probably be in my next post since there are much sorting and editing with those photos. :) In the meantime, I have this "unusual" yet delicious cupcake recipe to share with you all, Root Bear Float Cupcake. (^_^) 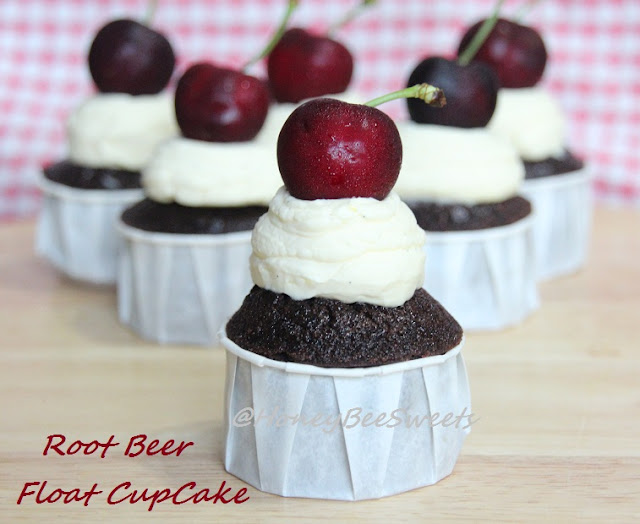 If you don't already know, I love root beer! It's probably the only soft drink that I consume. :) Last year I did a Root Beer Chocolate Chunks Chocolate Cake and it was really good too. However I find that this cupcake has a much intense root beer taste to it! 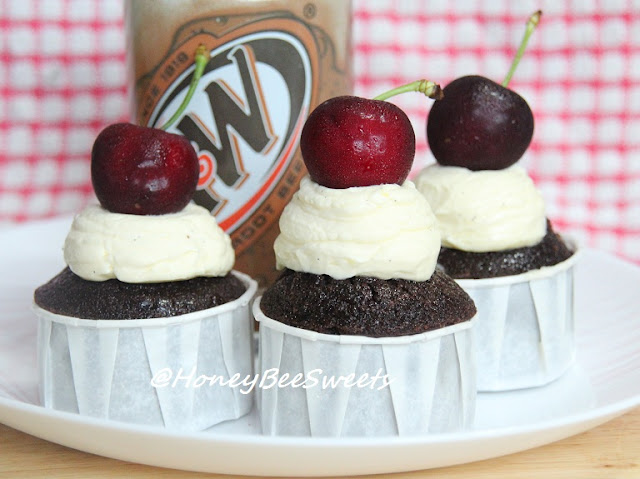 This recipe was inspired by Deb from Smitten Kitchen. When I saw it, I knew I had to give it a try. ;) I did several changes to it to match the amount of root beer in a standard can size for easier baking.
Ingredients for Root Beer Float Cupcakes (makes about 6 X 4oz cupcakes)
Cupcake
1 can or 330ml root beer (I used A&W brand, but any brand should do fine)
85g unsweetened cocoa powder
85g unsalted butter
180g Caster sugar
60g light brown sugar
170g cake flour
1/2 tsp baking soda
3/4 tsp salt I'm pretty sure many of you have had a root beer float before? In order to create that root beer float effect, that vanilla buttercream on top is supposingly the vanilla ice cream scoop. The cherry? Well, it does give it a more sundae look, don't you think? Although using a Maraschino cherry would be more "appropriate" but personally, I much prefer to fresh version. :)) 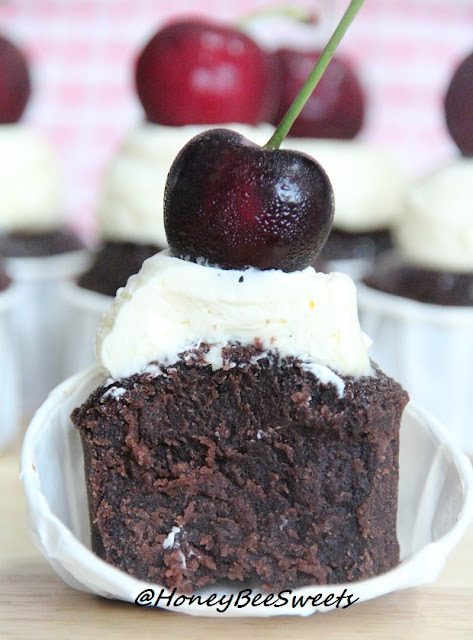 Since I did reduce the sugar level quite a bit, so with the vanilla SMB, the sweetness is just right. And you know, after chilling it, every bite does gives you that root beer float taste! How cool, a favorite beverage recreated into cupcake form, lol! If you like root beer like me, this will knock your socks off!
I will be submitting this fun cupcake to this month's Aspiring Bakers #13: Enjoy Cupcakes! (November 2011) hosted by Min of Min's Blog. Thanks Sze Min!
Alrighty everyone! Hope you all have a good day now, cheers!

BeeBee, I would love to try this cupcake with root beer too. Sounds so yummy, thanks for sharing :)

Wow, really does look super moist!
If only those cupcake liners comes with handles....

I used to love eating Root Beer Float at A&W when I was a child...

Your little RBF cakes does resemble the miniature version of the RBF! Love your idea of adding Root Beer in these cupcakes.

Two weeks holiday gone in a blink. Nice to have met you at the bloggers' meet. These cupcakes look moist and good.

I love the root beer too, your cupcakes looks adorable delish!

OMG! I just adore how these looks.

this is cool and it's nice that you can get the taste of rootbeer in the cupcakes. The last time i did a coca cola cake , the taste was not intense. I shall cross over to look at the cupcakes round up , must be awesome. Am excited to see your trip photos!

BeeBee, this is so special, I want to try this for sure. "Lau How Sui lor" hehe

By the look of the cupcakes, I know they taste super good!! Another one to add into my to-do-list!!
I never try to bake with any soft drinks before, so this is a must-try-recipe for me!!