I realise I never actually posted a pandan chiffon cake recipe before. @_@ Weird I know...that is probably one of the most baked and blogged about recipe on this whole media platform. :P I probably thought I did a write up before but I never did. Talk about goldfish memory. What's better was I came up with this recipe because I wanted to use up that bunch of fresh cut pandan leaves that is wilting by the day!

Well I guess it is better late then never! And better yet, this bake is a healthier rendition. Skipping the use of coconut milk and incorporate it's healthier counter part, coconut oil instead. WooHoo! Me love coconut oil! 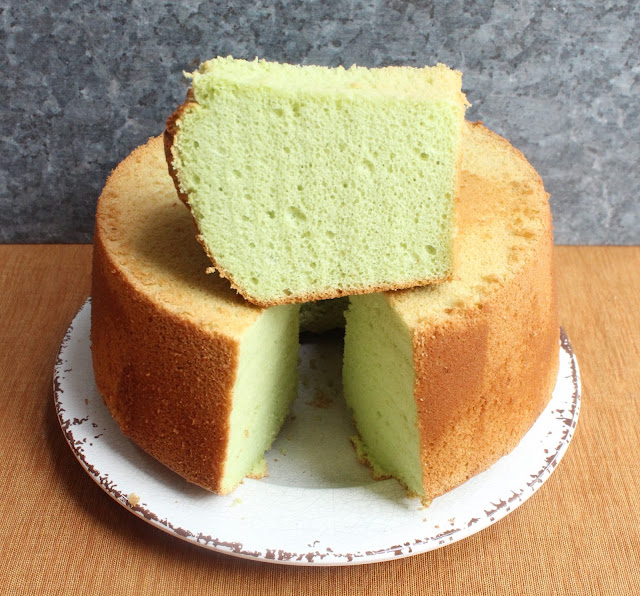 Difference in taste is pretty much insignificant to me. And the thought of this being the healthier bake, even if it was not as amazing as the original, I would still go with this one. Like I always say, eat healthy and stays healthy...if possible lah. By removing the coconut milk, it reduces much of the cholesterol. Using superfood coconut oil, it is still really fragrant and

Note that I did not want to introduce other forms of liquid (i.e. water) into the batter, so I used the evaporated milk to blend with the pandan leaves. 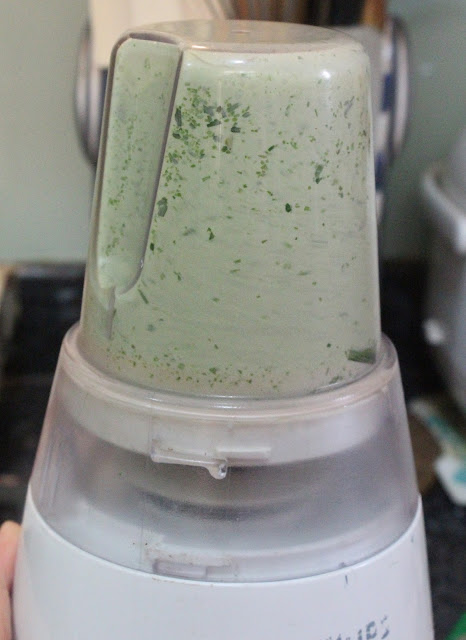 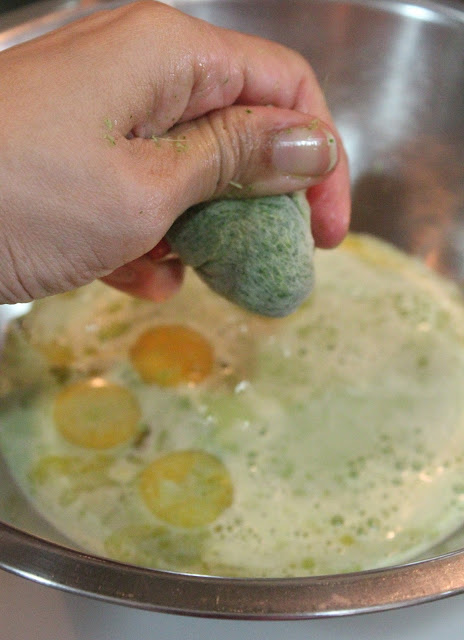 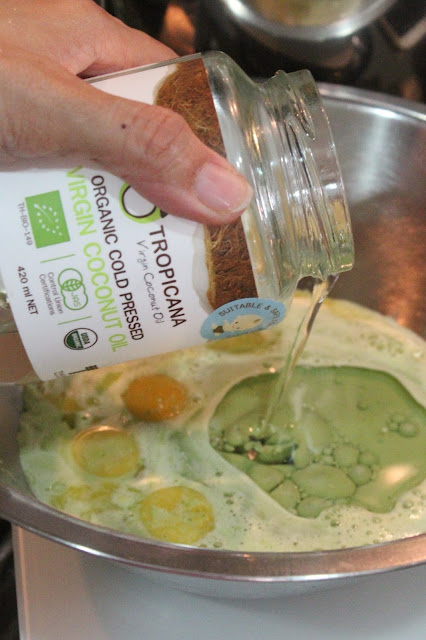 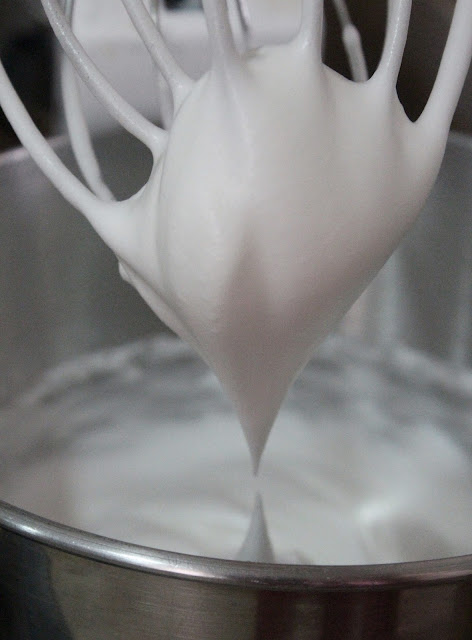 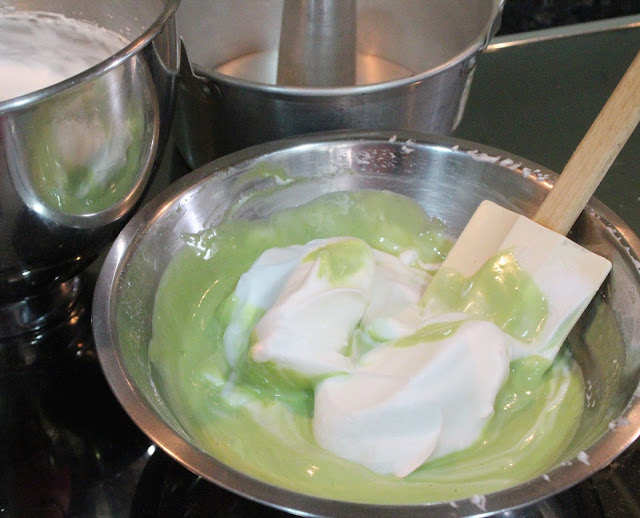 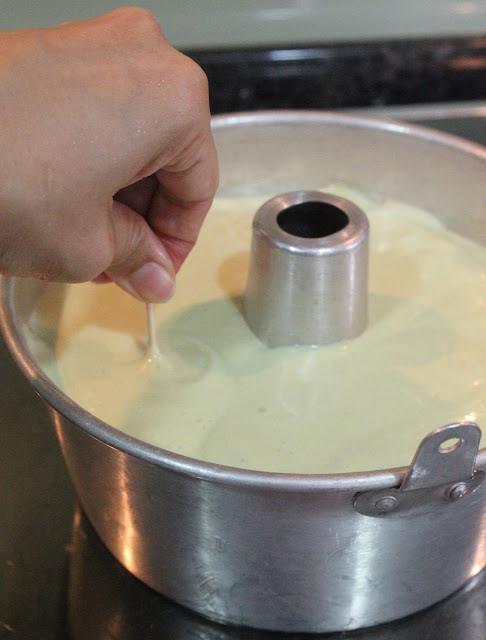 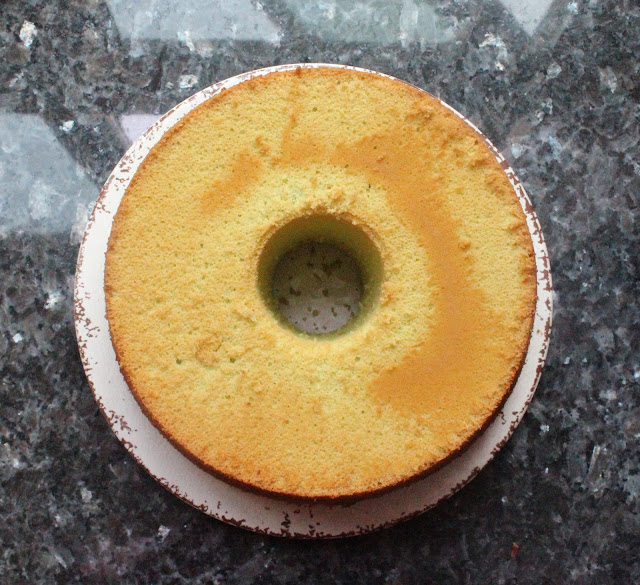 I suck big time at removing the chiffon from the tube pan...and that is why that 50 shades of brown. :P But a well baked chiffon should not give you too much of a problem in removing it anyways. 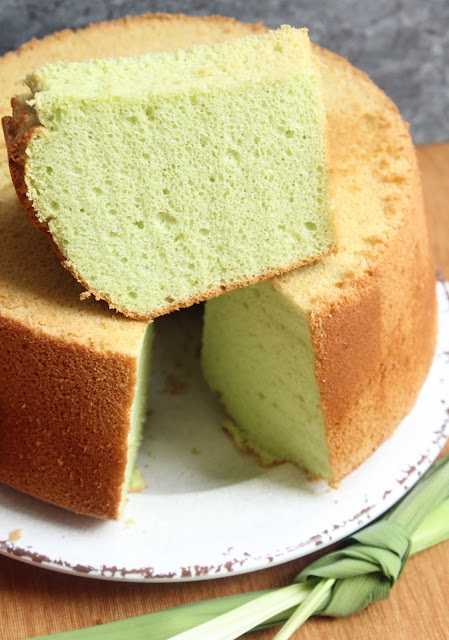 The fluffy soft texture of the cake. Nope, the coconut oil replacing the coconut milk did not make it any less tasty...at least it is that for my end. Do try it out and find out on your own. 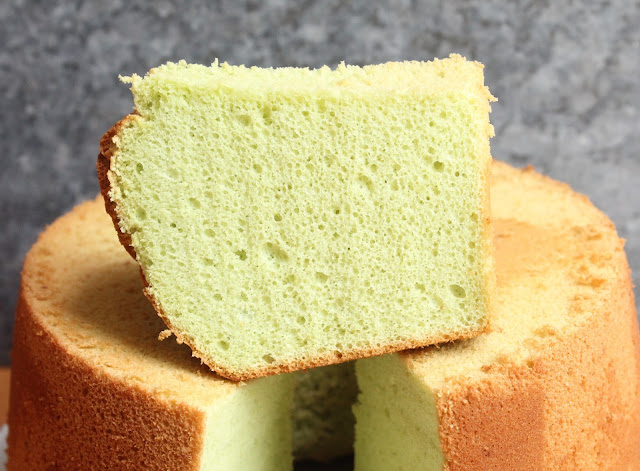 Hope this last shot is enough to convince you to give this healthier rendition a try. ;)

Where you can buy coconut oil:
Happy baking guys!

Posted by Honey Bee Sweets at 8:20 AM

I'm sure the coconut oil has added so much wonderful matchy flavor with the pandan! Cause I always like coconut pandan desserts, which reminds me of both SG and KL :)

So light, airy and smooth..Absolutely divine!

Is baking powder missing from the receipe? Tried ur receipe twice but the cake just don't rise. Like spongecake more than chiffon cake. Also, do u on the fan throughout the baking process? Thank u. :)

Ranis, I am 100% sure there is nothing wrong and nothing missing in my recipe. I bake chiffon cakes many times without baking powder. If your meringue is beaten to the right consistency, your chiffon will definitely turned out perfect. I reckon you seldom bake chiffon cakes? I did not do anything special to my oven, this is just another chiffon recipe that I bake, I did nothing special. Feel free to look through all my other chiffon recipes which I don't use baking powder. Not all chiffons require rising agent to bake perfectly.