The next recipe in line is a simple Black Pepper Pork Rib soup with Green Marrow (黑胡椒排骨毛瓜湯). In my household, we always have soup on our dinner table...even though we are not Cantonese haha! It all started when my elder child being a picky eater while young. So having soup during mealtimes, especially good nutritious soup is essential. Well if the kid is not eating much, at least the soup will fill the belly and give some good nutrition. :)

I am always looking for easy soup recipes that not only is wholesome but tastes good as well. So it is actually great that Lee Kum Kee comes up with these ready pack soup base that makes our lives much easier during dinner preparations. Black pepper being the king of spices, contains a good source of many anti-oxidant vitamins such as vitamin-C and vitamin-A. And do you know that peppercorns composes of health benefiting essential oils such as piperine, an amine alkaloid, which gives strong spicy pungent character to the pepper. 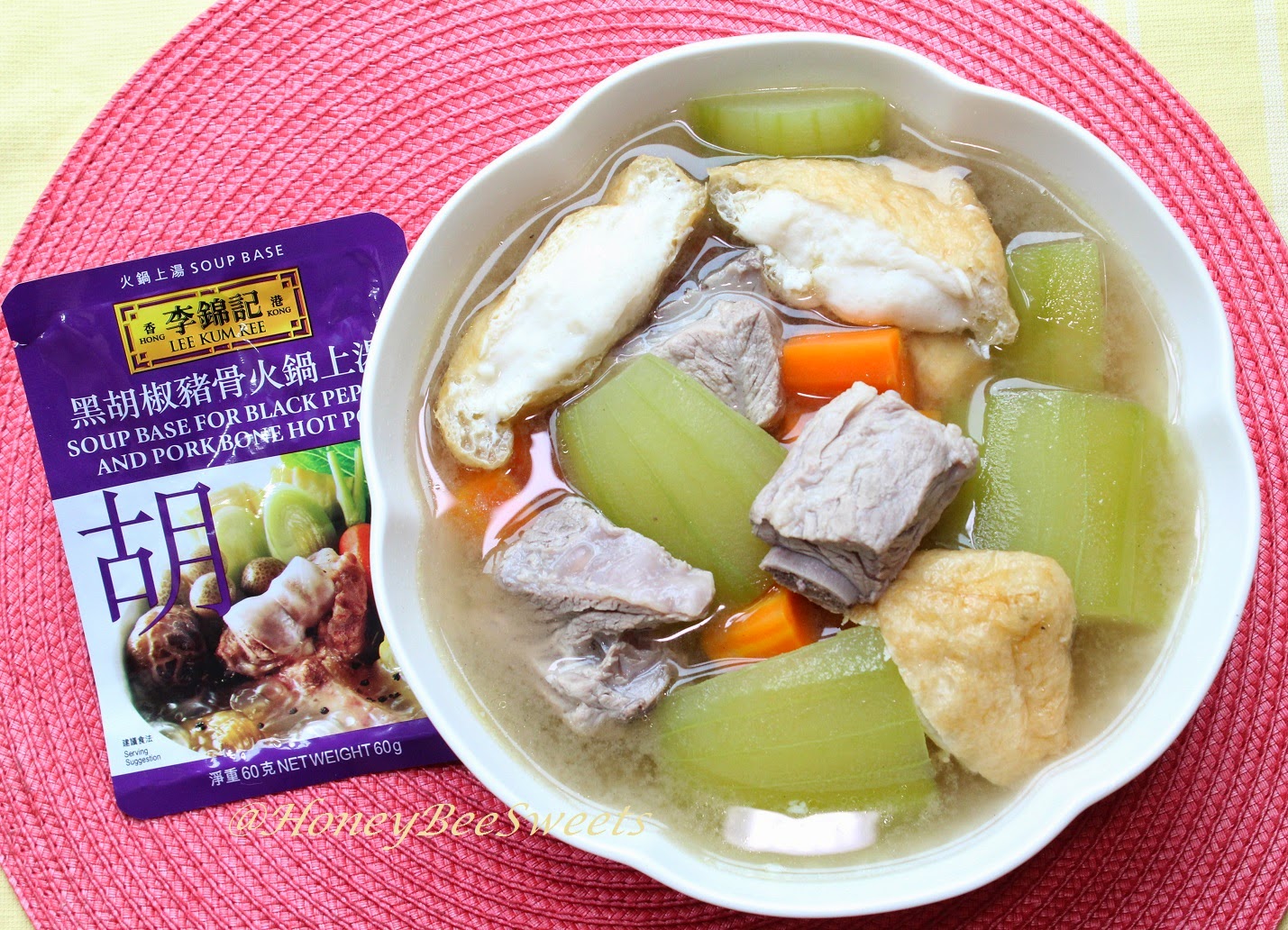 Enough said. Let's get on with it shall we?
Let's see what we need in this simple delicious soup recipe. :) I like my soup full of tasty ingredients(多多料), which essentially also makes the soup "sweeter" too. :9 This time I opted for Green Marrow(毛瓜) which has a cooling effect, plus it is rich in vitamin A and vitamin C. Also using fried beancurd skin and fish paste to make my own Tau pok Yong Dao Fu (豆皮酿豆腐) :9 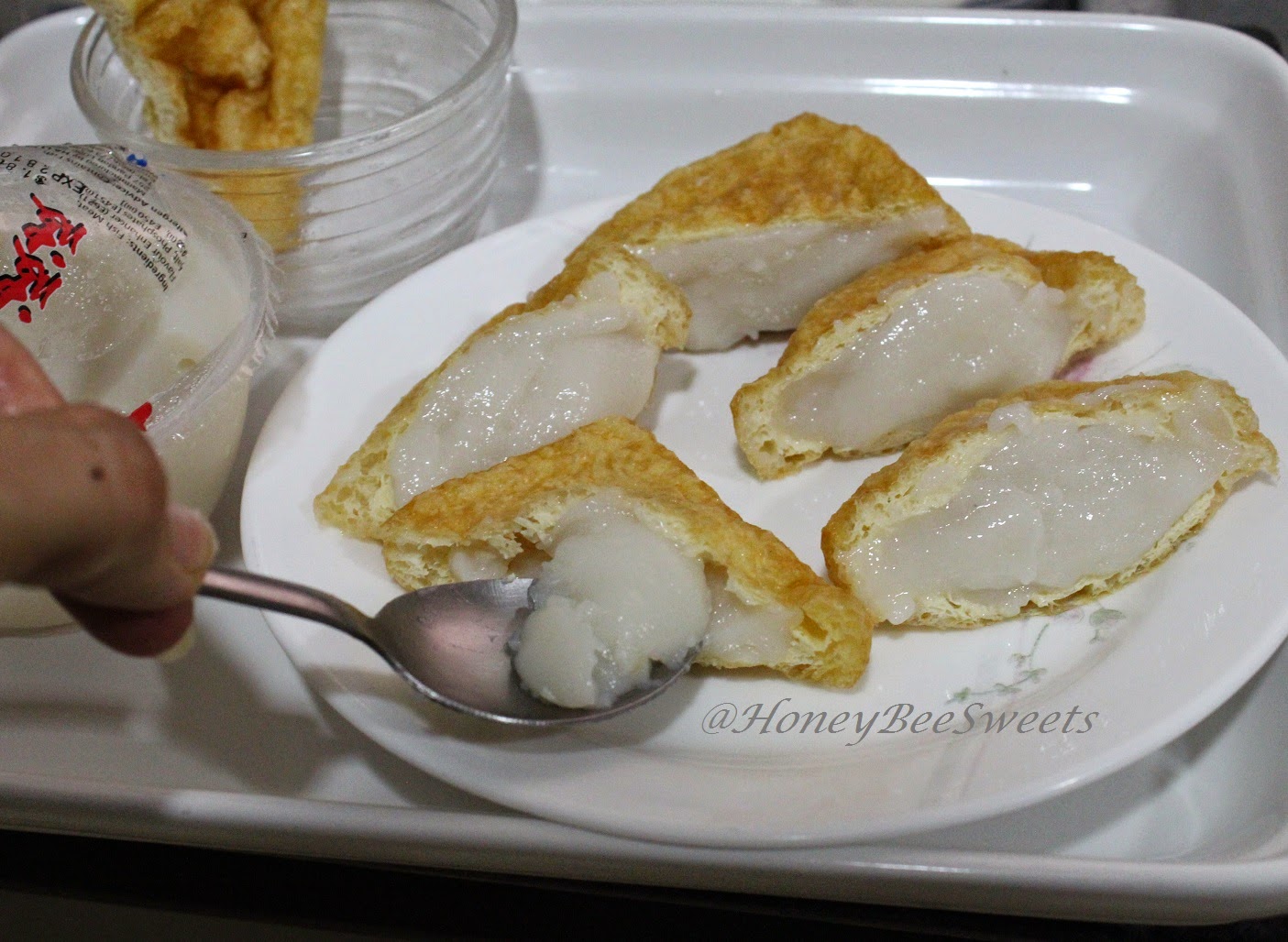 Gently cut the Tau pok diagonally into two triangles and slit the cavity without cutting all the way through. Then gently stuffed the fish paste into the cavity. Chill in the fridge till needed.
Then start boiling some water in the pot. Once it boils, turn off the fire and par-boil the pork ribs. 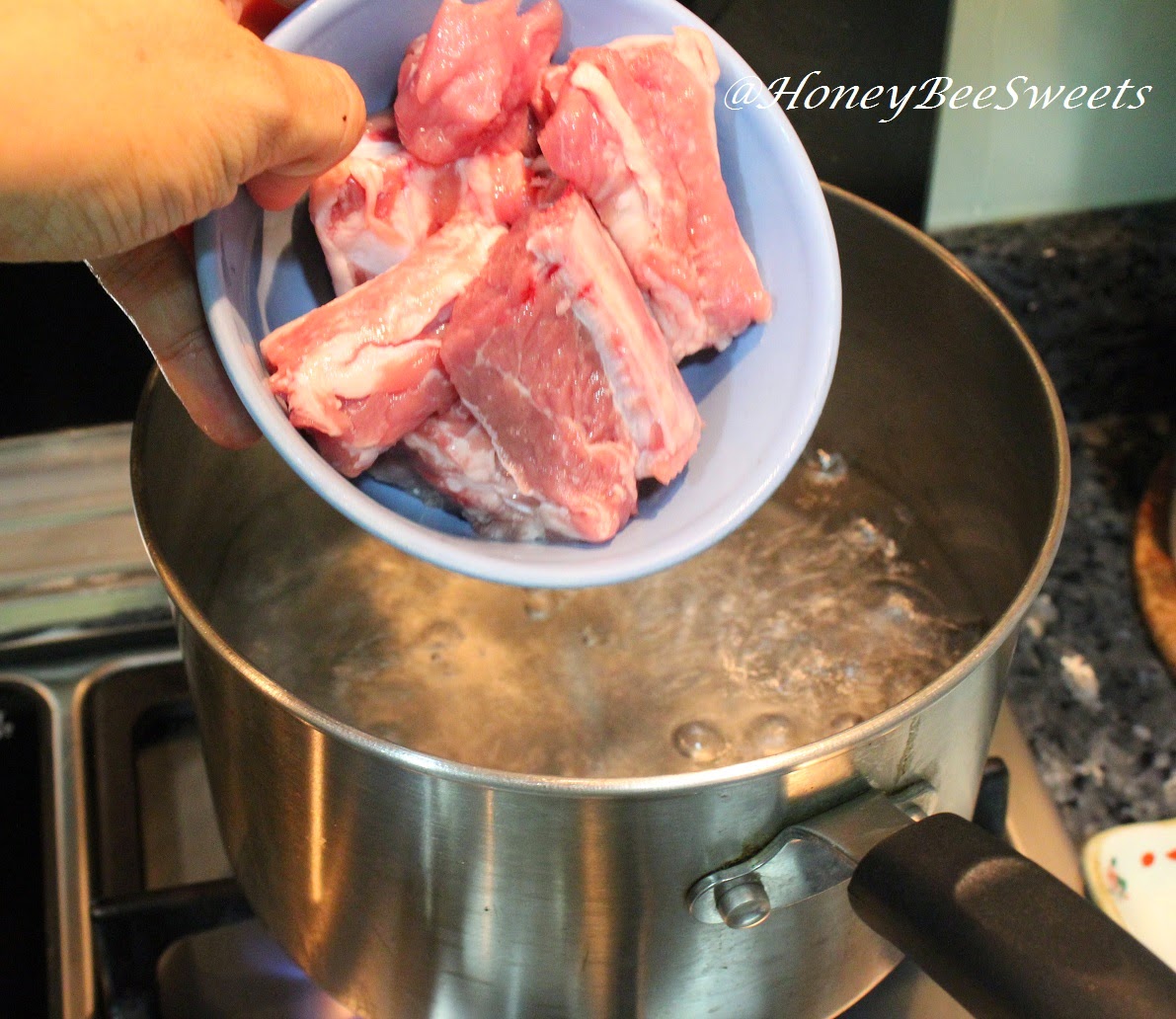 This is a step that I always do and I think you should too. Be it you are cooking chicken or pork rib soup, this par-boiling removes all the impurities and some fatty oil of the raw meat. Might be troublesome but essential, so don't skip. 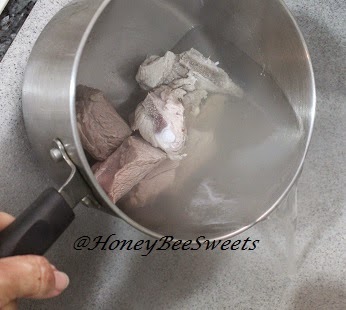 Remove the water once the meat turns opaque...takes like a few seconds. Fill the pot with more fresh water and start the fire again. 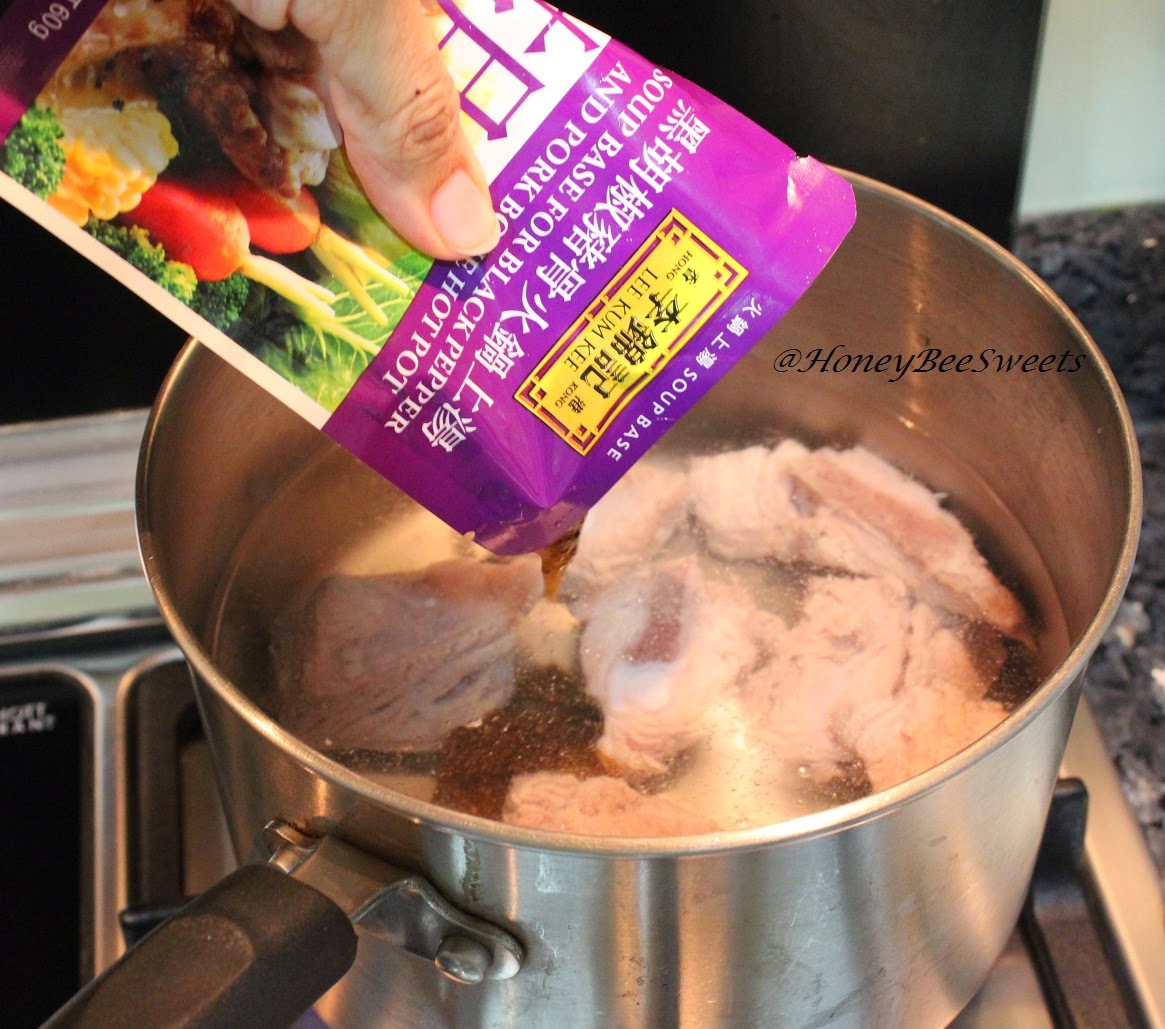 Next you add in the Lee Kum Kee Soup Base for Black Pepper and Pork Bone. Up the fire to highest and bring it to a boil. Once it boils, reduce to simmer. 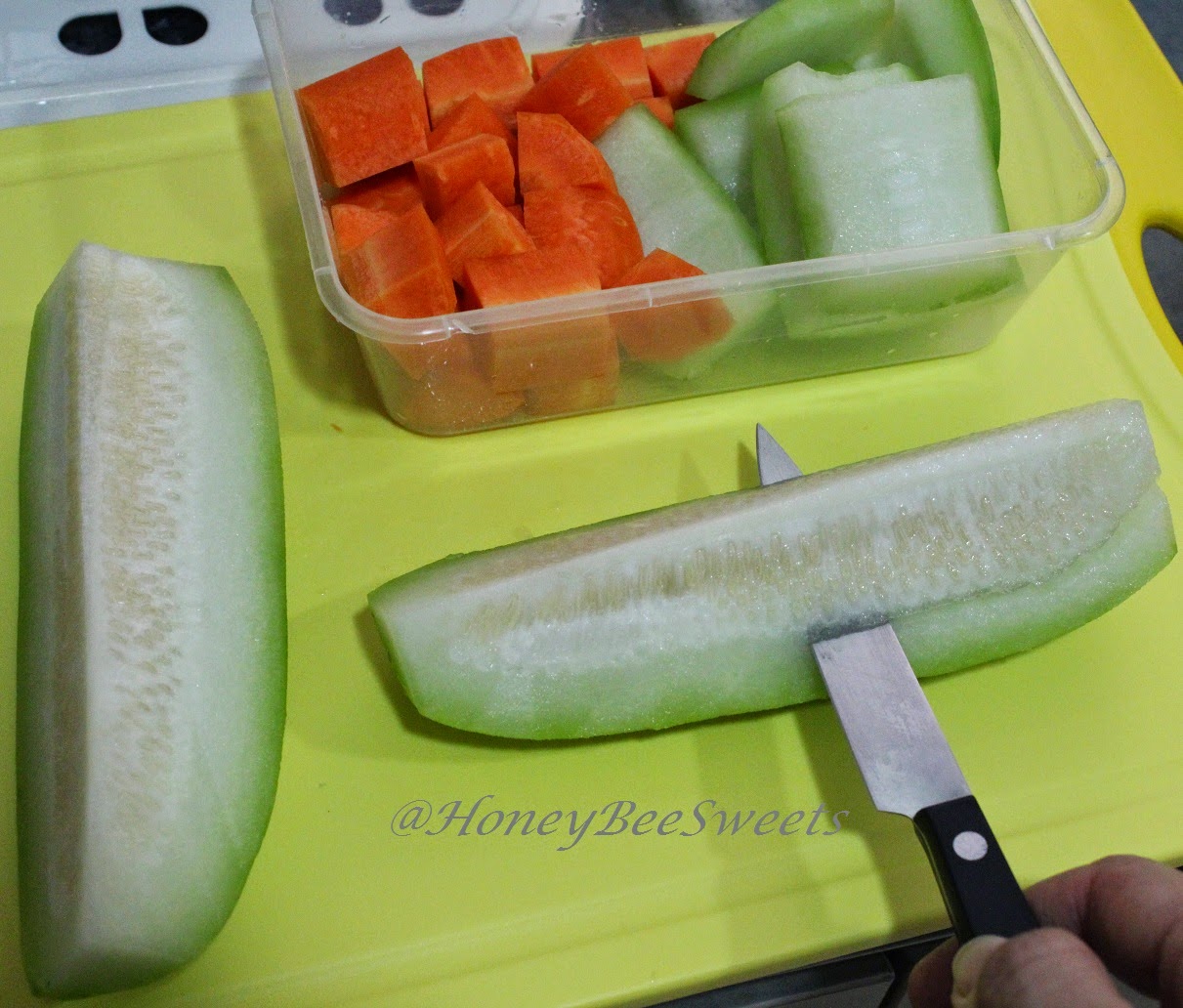 In the meantime while the soup is boiling, prep your vegetables. Peel the green marrow, and remove the seed sections as seen above. Cut the carrots into bite size. 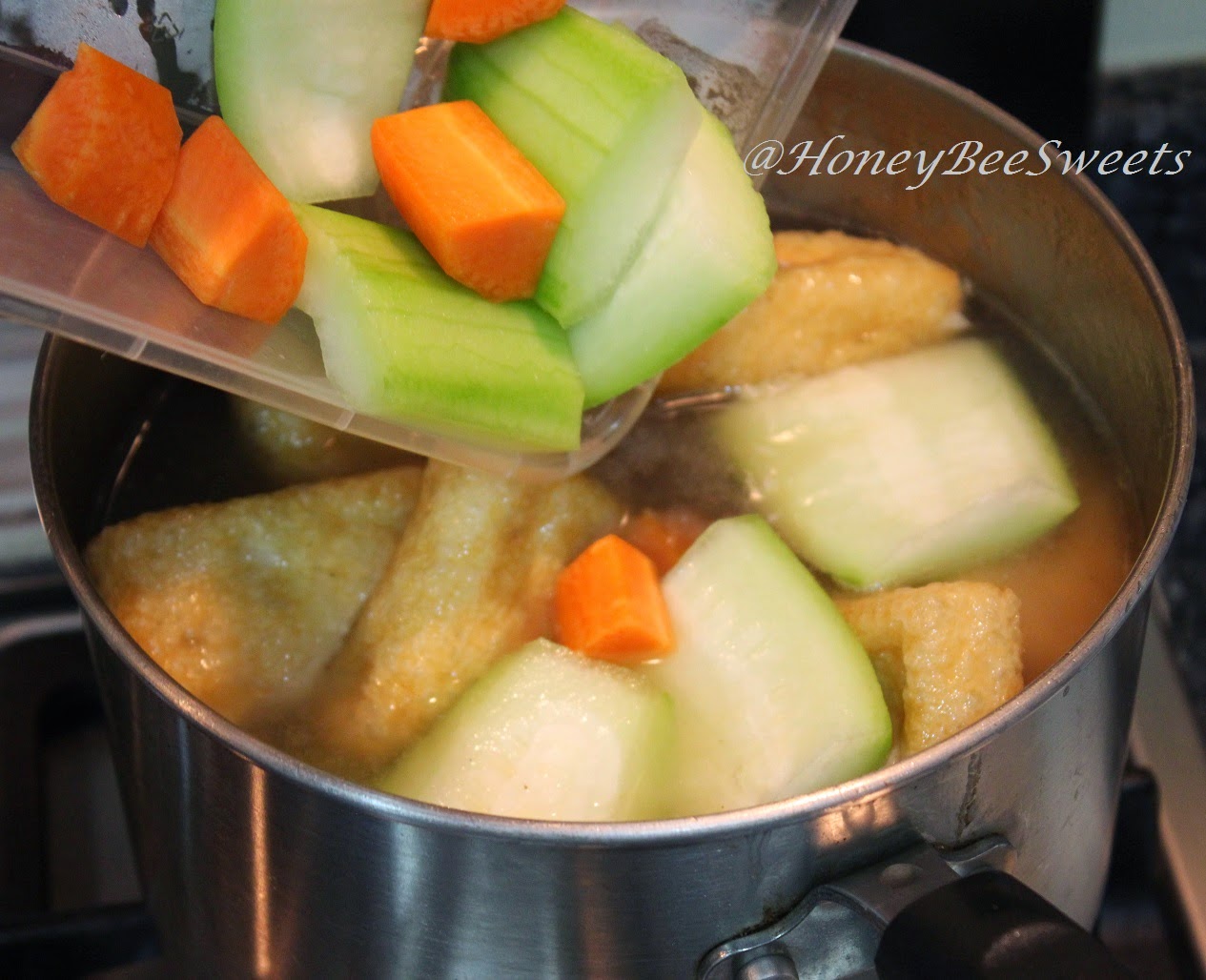 After the soup has been simmering for 15 minutes, add in the stuffed tau pok and vegetables in. Up the fire again and bring to a boil. Once it starts boiling, reduce to medium low and let it continue to a small boil for 5-7 minutes. Then off the fire and its ready to be served. :9 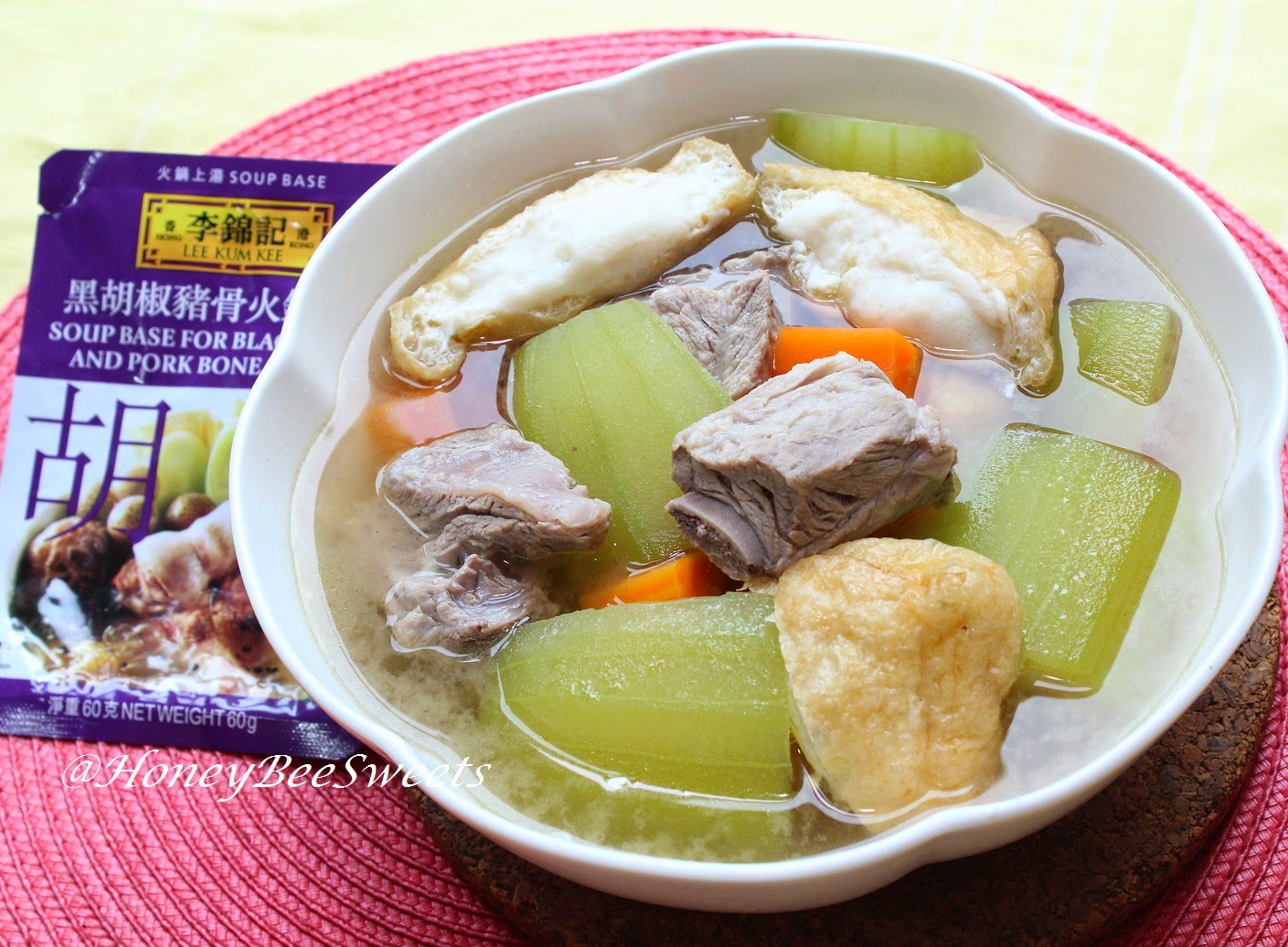 The slight heat from the black pepper is balanced off really well with the cooling green marrow. My kids actually enjoyed this soup very much despite the peppery taste. The sweetness from the fish paste and pork ribs also makes the soup extra flavorful and so perfect for cooling days like today. ;)

Hopefully you will give this recipe a try, I personally love it very much. Happy boiling!

It has AGES since I last saw or had a green marrow..It looks very appetizing and delicious!

This is very good... looks so nutritious. Always love a big bowl of soup with dinner.

look foward for your reply .

Thank you Angie! Haha...this is only the 2nd time I cook a green marrow! But yes it is good. ;)

Thanks Baby Sumo! Haha yes, drink soup daily...soup for the soul! Thanks for dropping by, appreciate it! ;)